The best Serbian race car driver tested his new Honda on Tazio Nuvolari circuit near Milan. This is the first and the only test Borkovic will have before the first racing weekend in Argentina on 7th and 8th of March. It took most of the time for Dusan’s team to adjust a seat for the world tallest racer.

Borkovic’s car wasn’t ready for the first test but Serbian champion will test in Italy next week.

Dusan Borkovic is currently in Barcelona with all the FIA WTCC drivers and manufacturers for the first official test before the new season’s start. New Lada cars were the only ones to miss this meeting because they are still on Paul Ricard circuit in France preparing the cars. 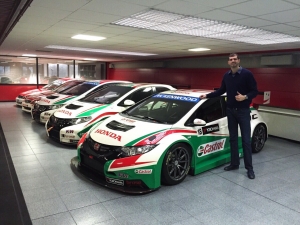 In the WTCC 2015 season the best Serbian race car driver will debut in Honda Civic TC1 with the help of  his country, sponsors and Italian Pro Team.

The best Serbian race car driver Dušan Borković in his second FIA WTCC season will compete with an Italian based Pro team. Borković will still have #98 as in the first season in WTCC, only now on Honda Civic TC1.