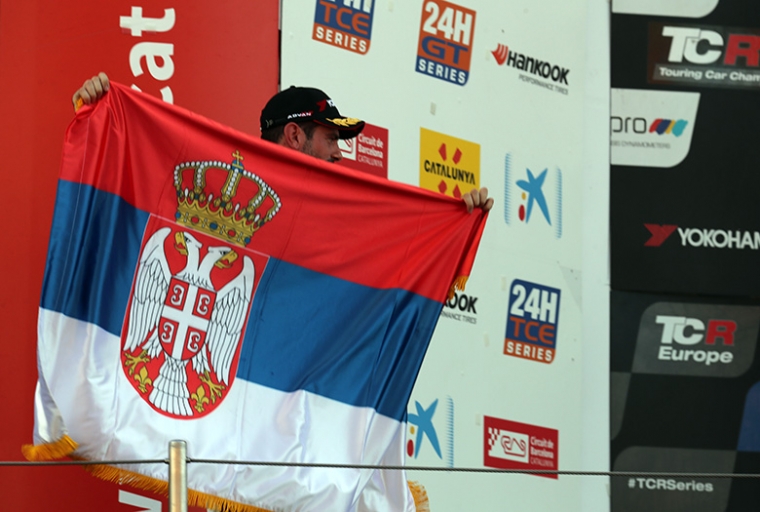 The best Serbian race car driver wasn’t able to finish the second race in Barcelona due to car damages caused by multiple collisions.

The best Serbian race car driver Dušan Borković finished 3rd in the TCR Europe overall standings. He wasn’t able to finish the last race of the season after the duel with 3 drivers. Borkovic was the main reason his Target Competition Team finished 2nd in the team’s championship with a great season behind him.
Borkovic finished 2nd in the first race on Saturday in a race with 32 drivers.

Dusan started the second race from the 6th place, he moved one place forward because his team mate Richard was disqualified.

Serbian champion had a very slight chance of winning the title, if he finished first and Azcona finished 9th, 10th, etc. Borkovic had to finish in front of Tassi and Verany for the second place, but few moments into the race Tassi and Files crashed into Borkovic and almost ran him off the track. Few moments later Azcona hit Borkovic’s car spun him and threw his car on Tassi’s which got them both off the track.

"The race and the season are over. I can’t say that I am happy but at least I am 3rd in the overall standings. It was a mess at the start of the race, Tassi and Files didn’t break at all. Tassi hit me and broke my wheel. If I had finished the race in top 10 I would have been 2nd in the overall standings, but it is what it is. At the start of the season I was the biggest title contender considering driving, speed and victories achived. But a lot has happened that was bad for me, however I showed my skills. We will see for the next season, I would like to stay in this championship with this car brand and this team and win the title. I want to thank my Target Competition Team, they did a great job throughout the whole season, Hyundai Motorsport, my sponsors, fans from all over the world but especially from my Serbia and Pancevo.", Borković said after the race.

Borkovic made a great success this season. During this season of the TCR Europe a total amount of 50 drivers and 30 teams competed in the championship. Considering that fact, 3rd place in the overall standings and the 2nd place in the team’s standings are very respectable.

Borkovic had 5 podiums and 3 victories this season.