Slovakia ring: Collision disrupted the appearance of our champion 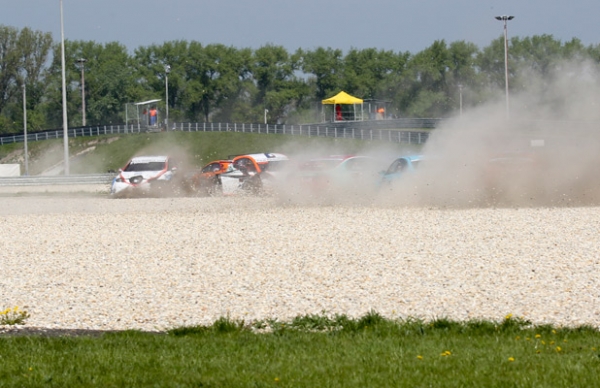 At the pre-race warm-up all was functioning perfectly. The car was finally well tuned and our talented Duca was feeling great in it. He started the race with a lap to warm up and in the first lap of the first race there was a big crash that involved 6 cars. Borkovic caught a momentum and began to overtake one by one rival. At the time when he wanted to get away from the crowd, he indured a hit on his front left side at the speed of over 120km / h. From 6 cars involved in the incident Borkovic’s car suffered the greatest damage.

Our champion was banged up in the crash, but other than minor injuries of his nose, fortunately did not have serious injuries. Damages to the car were huge and it were not able to be fixed for the second race.

“Even though it was a big impact, luckily I am not seriously injured. I’m sad that this how the race turned out, because we managed to have the car in great shape and I felt good. I started great, and I think I’d be on the podium if I had not been hit. What’s done is done, no time for wining. Let’s move on. “- Said the current European hil lclimb champion Dusan Borkovic.

Spanish engineers who are part of NIS Petrol Racing Team were pleased with the start of the race that Borkovic had regardless of the crash for which he is not responsible. “Borkovic is boldly going and overtaking rivals like no other in this competition, but unfortunately he was stopped. More and more we believe that Borkovic will achieve great results in the ETCC”- Spanish experts believe.

Between training, in the NIS Petrol Racing Team tent voluntarily stopped the famous Gabriele Tarquini, to get acquainted with Borkovic and wished him welcome in the ETCC. It is interesting that the Seat Leon TFSI S2000 driven by Dusan at the beginning of his trip was in the hands of a charismatic Tarquinii.

More in this category: « Borkovic successfully “saddled” his Lion Successful start of the ETCC season for Dusan Borkovic on the podium at Monza »
back to top