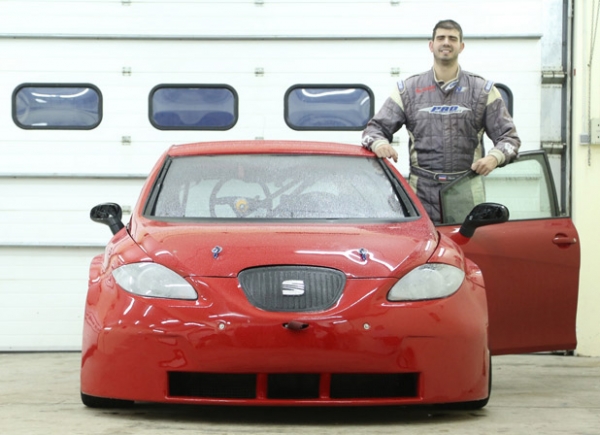 The best Serbian race car driver Dusan Borkovic had the first test in his Seat Leon TFSI with which he will compete this year in the FIA European Touring Car Cup (ETCC).

On the racetrack Grobnik near Rijeka (Croatia) Dusan Borkovic turned on and tested his new car for the first time this season. Under heavy rain and reduced visibility Borković drove only seven laps. He achieved excellent time given the difficult conditions on the race track, the fact that the car was set up for dry weather and gas set at a maximum of 90%.

Upon completion of the test Borkovic couldn’t hide his delight with the car, that was previously owned by Gabriele Tarquini, a former world champion in WTCC.

“Although this was my first test with the new car, on the track where I have not driven before and with difficult weather conditions, I am very pleased with my new Beast. It was tough. This car is absolutely a different machine compared to Mitsubishi that I drove last year, with which I won FIA European Hill Climb Championship. G forces are stronger when turning and braking. Our chief engineer (Miroslav

Rastovic from Croatia), who has many years of experience with this car, is more than satisfied with my performance today, which means a lot to me. I’m looking forward to the next test that will be at Monza next Friday (15. March). We will use this test to align all settings, install a new engine and get better information about the car and track at Monza along with our Spanish partners Sunred “- said Borkovic very optimistically after the first test.

Borkovic’s first race of the season will be driven on 24. March at the famous race track in Monza (Italy), with direct television broadcast on Eurosport.

“There is still a lot of work to be done before the season, but I’m sure that everyone in the team is going to give their best so the “ Lion” is in tip-top condition for Monza. After this test I believe even more that I can bring Serbia at least one podium this year from FIA European Touring Car Cup (ETCC), and next year with much more experience on the new tracks I expect new titles. “- said the raining FIA European Hill Climb Champion Dusan Borkovic.

More in this category: « Borkovic will drive in Salzburg – The car is not going to be rapaired until tne next race Slovakia ring: Collision disrupted the appearance of our champion »
back to top