BORKOVIĆ ON THE PODIUM IN SINGAPORE 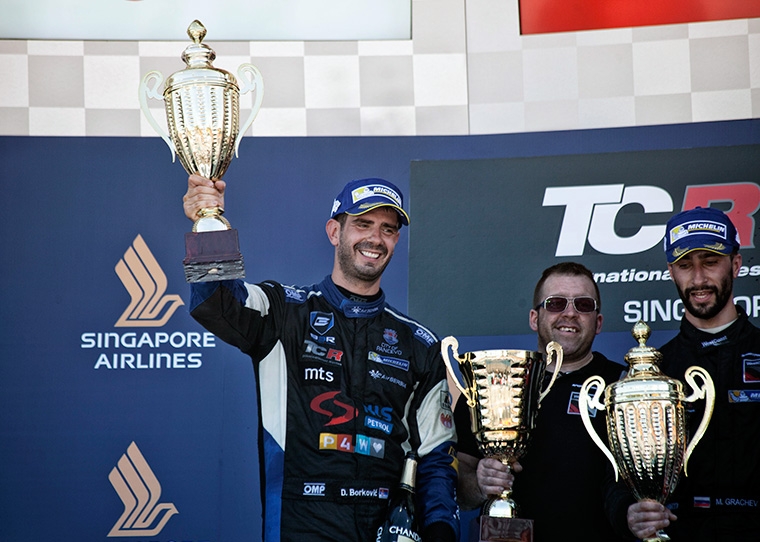 Dušan Borković won a podium for the 6th time this season in TCR International series with the second place in race 2 in Singapore collecting 18 new points. After a spectacular racing weekend on Marina Bay street circuit Serbian champion has 24 new points and is now 7th in the overall standings with 141 points in total.

Due to the number of contacts safety car was out on the track twice and shortened the race considerably, leaving only 7 laps out of 10 for the drivers to race. The event in Singapore was alongside with Formula 1, which is the reason TCR race 2 was only 30 minutes long and didnt go for 10 laps as scheduled.

Borkovic started from the second position and he kept it till the end of the race, not letting anyone pass him even after the safety car. But it also didn’t give him an opportunity to try to pass Grachev for the first place.

„I am a little disappointed because of the pace of the race, all the disruptions and time limits. Maybe I would have had a better opportunity to overtake Grachev if it wasn’t for that. Anyhow Honda is better on the start, the track is narrow and it is hard to pass on it. All in all it was a good weekend I collected new points and saved my car for the next round and I hope I will continue with the same pace in Malaysia in two weeks” - Borković said after the second race in Singapore.

Next races in TCR International series are on 30th of September and 1st of October in Sepang, Malaysia.

More in this category: « BORKOVIC COLLECTS NEW POINTS IN THE FIRST, NIGHT RACE IN SINGAPORE BORKOVIĆ CONTINUES COLLECTING POINTS IN TCR INTERNATIONAL SERIES »
back to top