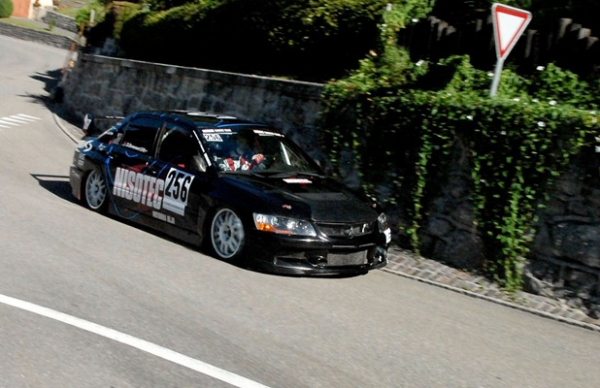 The best Serbian race car driver Dusan Borkovic and his Nisotec Racing Team have scored 7th victory in the FIA European Hill Climb Championship 2012. Borkovic was the best on the track today in Switzerland (Course de côte St-Ursanne – Les Rangiers). By winning on this track Borkovic is only “two” steps away from becoming the European Champion. There are only two races left until the end of the season (in Slovenia and Croatia).

Borkovic set the new track record in Switzerland (in category I), which is one of the fastest and most dangerous tracks, he was 2 seconds faster than the next best competitor. Dusan now holds records on 8 different European tracks. This is one more great performance by Dusan Borkovic and Nisotec Racing Team. Race in Switzerland was driven in tropical heat. Serbian champion already secured his victory in the first two races and didn’t drive the third one. After many technical problems in the past few weeks that brought huge financial consequences with it, not driving the third race was looking like a wise move.

“I am happy that the title of the European champion is closer than ever. This is a very dangerous track, I am happy that it all ended safely. When you add to the win that I also broke the record you can understand my excitement and complete content. I dedicate today’s victory to the colleague Milos Spasojevic-Spale that had a very bad accident on Saturday during the practice session on the Tara race in Serbia. I wish him a speedy recovery from the horrible accident”-said Dusan Borkovic after the race.

Next, second to last, race of FIA European Hill Climb Championship 2012 is going to be held next weekend in Slovenia (18. GHD Ilirska Bistrica 2012).