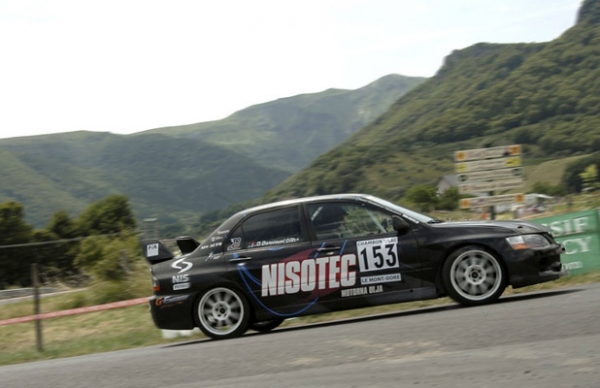 The best Serbian race car driver Dusan Borkovic scores his sixth victory in FIA European Hill Climb Championship 2012. Today’s race was held in France (Course de Côte du Mont Dore Chambon sur Lac). By winning the race in France Borkovic distanced himself from other competitors and is closer to winning the European Hill Climb Championship title. There is only three races left until the end of the season-Switzerland, Slovenia and Croatia.

After great performances so far this season, but also great malfunctions at the previous race in Slovakia, Borkovic has made his presence known in France and one more time has climbed up to the top of the winners podium. All that didn’t happen without incidents. Already at the first race Borkovic had problems with a gear box, but despite it he managed to have the best times in both of the races held in his class.

“I am very happy to fulfill my fans’ expectations and to make my nation happy with this achievement. Most likely I need only one more race to secure the European Hill Climb Champion title; but because of my fans, sponsors and the whole nation I will try my best to win all of the three remaining races. Today was very hard because of the unexpected problems with the gear box, but the most important thing is that we won, took home points and are ever closer to the goal. Now, I am assured that in few weeks and for the first time ever Serbia is going to have a European Champion in car races. I want to congratulate to Ivana Maksimovic for the 100. medal, and to add that today during the race I had a feeling like I was also competing in London.”- said Dusan Borkovic after the race.