Dusan Borkovic still on top despite technical problems in Slovakia 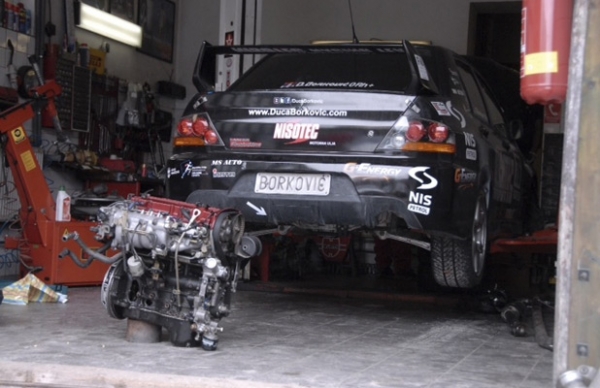 The best Serbian race car driver and a member of Nisotec Racing Team, after seventh race in Slovakia is still the first on the leader’s board in FIA European Hill Climb Championship 2012. For the first time this season Borkovic did not climb up to the winners podium due to the numerous technical problems.  He was only 3 kilometers away from having a new victory, when a turbo hoe fell out and he barely finished the climb.

First big trouble for Borkovic’s Mitsubishi happened at the first practice on Saturday when pulley blew part of the engine, because of which Nisotec Racing Team mechanics worked all night on putting together new engine. Parts for the engine were coming from Serbia and Hungary, and some time before the down on Sunday thanks to the great efforts of the guys from the team Mitsubishi Lancer Evolution 9 was somewhat ready for the race on Sunday.

“Weekend was full of bad luck. A good thing is that I am still the leader in the general categorization for cars, and I think that this much bad luck can not be repeated. It was just bad luck after bad luck. We had an accident even arriving to the race in Slovakia, when we hit the dog with the private vehicle and luckily only damaged plastic parts of the car. Later on, when we were driving 20km/hour we managed to hit a cat on the road. Than the engine blew at the practice and 3 kilometers before the finish the hoe falls out of the turbo. I really can not believe what all happened this weekend.” –stated Dusan Borkovic after the race in Slovakia.