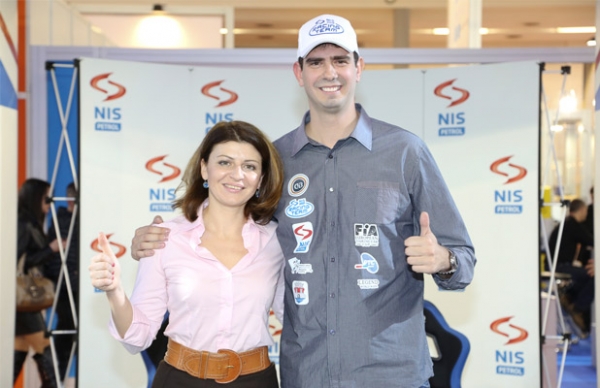 At NIS j.s.c. stand at the Motor Show, NIS j.s.c. Novi Sad and Dusan Borkovic officially entered into agreement to mark the continuation of their fruitful cooperation and competing of Serbia’s most successful racing car driver as a part of the NIS Petrol Racing Team.

After signing the agreement, which officially marked the third year of successful cooperation between the largest domestic company and Serbia’s most successful racing car driver, visitors of NIS j.s.c. stand at the Motor Show in Hall 2 had the opportunity to spend time with Borkovic. An entire stand with the caption «Champion Recommends NIS j.s.c.» was separated for this purpose so that the visitors could talk about car racing with our best sportsman in this discipline and take photographs sitting with the champion in genuine racing car seats in front of a panel simulating a vehicle in motion.

The third year of support to the European hill climb racing champion is the confirmation of NIS j.s.c’s commitment to promote top quality sport and healthy lifestyles. This is also the opportunity for NIS j.s.c to promote its well-known tri-coloured NIS Petrol brand with a wide-spread network of 350 petrol stations in Serbia.

“Supporting the most successful domestic and European racing car driver Dusan Borkovic has come naturally, as the most successful rely on their equals – NIS j.s.c. is the most prosperous domestic company and NIS Petrol is the leader in the petroleum product retail market. We believe that this synergy will be beneficial to both parties, inspiring Dusan Borkovic to become even more successful globally and assisting NIS Petrol to find its way towards regional leadership,” Nadezhda Korobeinikova, the Director of NIS Petrol Retail Department pointed out.

“To become even better, I need support from the best. I am glad that NIS j.s.c. has recognised the importance of promoting our country through this sport now for three years in a row. Now I have even greater support from NIS j.s.c, which is an encouragement and a positive signal to rise to this year’s challenges to ensue in the most prestigious European Touring Car Championship (ЕТCC) and winning it will be the first of my future challenges,” said Dusan Borkovic.

Dusan Borkovic has showed an unusual talent at competitions so far, leaving much older and experienced drivers behind, as well as much faster, better equipped and more expensive cars. With more than 200 trophies, Borkovic is the most award-winning racing car driver in Serbia, the European hill climb racing champion, Serbia’s youngest winner of the “Diamond Helmet”, and the winner of three “Gold Helmets”.

More in this category: « Successful start of the ETCC season for Dusan Borkovic on the podium at Monza
back to top